Peter Sagal, host of NPR’s Wait Wait…Don’t Tell Me!, will be asking probing questions about the Constitution to Americans across the country on the new PBS show CONSTITUTION USA with Peter Sagal, premiering tonight.

With a grant from the NEH, Sagal explores contemporary constitutional debates about free speech in the digital age, same-sex marriage, and separation of church and state. He speaks with everyday Americans as well as legal scholars, historians, and public figures. To collect these intriguing and sometimes surprising insights, he travels on his beloved and patriotic Harley Davidson motorcycle.

The series will air every Tuesday in May. Each one-hour episode focuses on a central theme of the Constitution: “A More Perfect Union,” “It’s a Free Country,” “Created Equal,” and “Built to Last?” For more information on each episode, visit Constitution USA’s website.

The website provides video clips further resources on each of the four themes to be covered in the show. It also has games for younger audiences (take the citizenship quiz!), a summary of the show’s background and purpose, and the episodes themselves once they air.

Be sure to tune in tonight at 9 p.m. eastern time for the show’s premiere!

Throughout the year, the NEH funds libraries, colleges, and media programs that often have an environment focus. In honor of Earth day, here are two recent projects that promoted the spirit of preservation in different ways.

The documentary John Muir in the New World takes a brilliant and in-depth look at one of America’s first environmentalists, John Muir. Narrated by Jane Alexander, Academy Award-winning actress and former director of the National Endowment for the Arts, the film features Muir’s personal journal entries as well as interviews with historians dedicated to studying his legacy.

The NEH’s Division of Public Programs funded the documentary, which aired on PBS on Earth Day in 2011 and is still available on PBSvideo.com. The film went on to be featured at D.C.’s 2012 Environmental Film Festival. It is a beautiful and insightful homage to one of the founders of America’s national parks system. 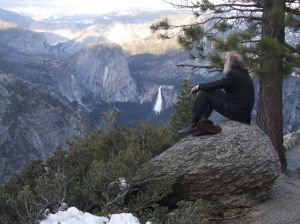 Delaware’s Winterthur Museum, Garden & Library holds an unparalleled collection of American antiques from as early as the seventeenth century. Its sprawling grounds bloom all year, thanks to founder Henry du Pont, who wished to present nature as a work of art. After receiving a Cultural Heritage grant from the NEH, the Museum now protects its collection with updated, energy efficient heating and cooling systems.

The Sustaining Cultural Heritage Collections allows museums such as Winterthur to improve the preservation of their collections and save on energy costs. Museum directors can then put money towards better programming and continued research. Visitors benefit from the richer exhibits and the environment benefits from lowered energy use. 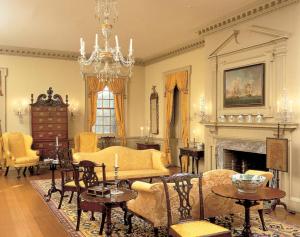 An example of the gorgeous artifacts on display at Winterthur Museum.
Photo courtesy of Winterthur.org.

This month, NYU’s DC campus will be celebrating Women’s History Month with a screening of a documentary funded by the NEH: No Job for a Woman.

The documentary – written, directed, and produced by Michele Midori Fillion – follows three female reporters during World War II and their efforts to gain access to stories on the front lines. Dickey Chapelle, Ruth Cowan, and Martha Gellhorn all refused to agree with the common opinion that women were incapable of writing about the violence of the war, and consequently their determination led them where few women had gone before. 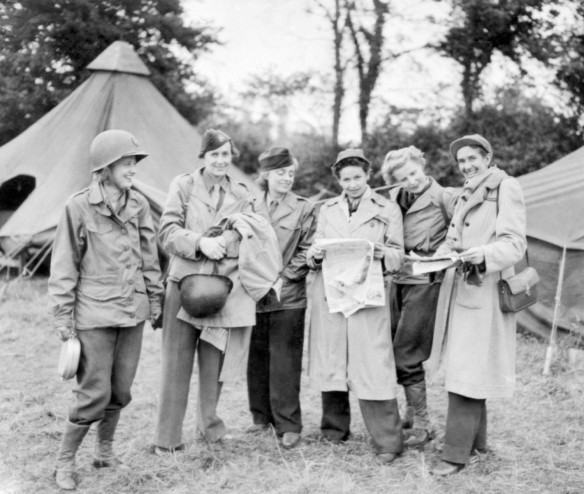 The Stories of Female Story-tellers

Dickey Chapelle convinced a press officer that her “woman’s angle” required photographs of combat from the front lines. Ruth Cowan took such care in her interviews of nurses and female army personnel that she became the first accredited female war reporter for the U.S. Army. Martha reported about the war’s impact on ordinary citizens, and left her post in London when she finally gained access to the front.

A DVD copy of the documentary is available for purchase on the film’s website and is available online through World Channel.

The screening at NYU’s DC campus will be held March 28 from 6-8pm and will be followed by a panel discussion about the role of women in government, politics, military, and the media. The panelists include Michele Fillion as well as Admiral Ann E. Rondeau, Missy Ryan, Leisa Meyer, and Kristen Rouse. CNN’s Soledad O’Brien will moderate. Register for the screening here.

On January 1, 1863, Abraham Lincoln made history by signing the Emancipation Proclamation, declaring all Confederate-area slaves to be free men and women. This past New Year’s Day, we celebrated the 150th anniversary of the signing of this historic document. The National Endowment for the Humanities joined the celebrations in many ways, one of which is the Created Equal: America’s Civil Rights initiative.

The Created Equal initiative combines four films produced by grants from the NEH and released within the past two years. The films explore different facets of freedom and equality in America. NEH hopes that they will promote conversations about the changing meanings of these concepts in American history. The films—in addition to other materials—will be distributed to 500 schools, libraries, museums, and community centers in the next three years.

Interestingly, one of the films, The Abolitionists, takes us back even further in time in the struggle for emancipation. Thirty years before Lincoln would make history and change the landscape of slavery, a small group of reformers called for the immediate emancipation of millions of slaves. The reformers challenged Americans to confront the fact that a nation founded on freedom and equality was keeping millions enslaved based on the color of their skin. The Abolitionists documents this ambitious social movement.

The other films include Slavery by Another Name, which documents the forced labor to which many African Americans were subjected even after the Emancipation Proclamation was signed; Freedom Riders, which explores American democracy, nonviolence, social change, and the dynamics of the Civil Rights movement amidst the 1961 Freedom Rides; and The Loving Story, which documents the interracial marriage of Richard and Mildred Loving that eventually led to the overturn of anti-miscegenation laws in the United States.

The four films are the kick-off for the Created Equal initiative. In addition to the films, Created Equal will also provide recipients with community toolkits, the traveling exhibition Changing America, online resources for middle and high school classrooms, an interactive website, and other resources.

Screenings of The Abolitionists and Freedom Riders are available on OVEE, which allows you to watch the film with an audience, but in the comfort of your own home. Sections of the two films will appear in the Virginia Foundation for the Humanities first online screening on Feb. 28 at 4:00 PM EST, in which various human rights struggles will be addressed. In addition, The Abolitionists, Slavery by Another Name, and The Freedom Riders are all available for free viewing online at PBS.org; The Loving Story is available for viewing on HBO.com.

The Created Equal film set was created in partnership with the Gilder Lehrman Institute of American History.

Created Equal is funded by the NEH Division of Public Programs. Community organizations interested in receiving Created Equal will be able to apply for the film set beginning in March. Application guidelines will most likely be made available in mid-March. Film distribution will begin in late August 2013, and the program is expected to continue for three years. In selecting recipients NEH will consider the public humanities programs that the community organizations plan around the films, in addition to the organizations’ ability to reach target audiences and market programs effectively. Until the Created Equal website launches in late March, please address all questions to the Division of Public Programs.

Even though Valentine’s Day was a little over a week ago, the spirit of the holiday is still fresh in our minds. Whether you celebrated the holiday with friends, family, or a significant other—or all three—the holiday provides a chance for all of us to acknowledge the ones we hold most dear. Last Thursday, we celebrated the holiday through the sharing of Valentines, candy, flowers, and other gifts.

While same-sex marriage may be the contested issue in the field of marriage these days, 35 years ago it was interracial marriage.

Since 1967, interracial marriage has been legal in every state in the country, due to the landmark case Loving v. Virginia. The Lovings—Richard and Mildred—were an interracial couple that married in Washington, D.C. in 1958, but were arrested upon returning to their home state of Virginia, where interracial marriage was still illegal. They were faced with three options: leave the state or face a one-year jail sentence, live elsewhere together, or return to Virginia separately. As they began to miss their families and home state while living in D.C., they got in touch with the American Civil Liberties Union, at the suggestion of then-Attorney General Robert F. Kennedy. After they were met with frustrating results in the Virginia Supreme Court, they took their case to the U.S. Supreme Court. Nine years after they married, the Supreme Court not only ruled in the Lovings’ favor but also overturned anti-miscegenation laws country-wide.

Their phenomenal story of love was turned into a documentary last year by Nancy F. Buirski and Elisabeth Haviland James. Using photos and home video footage of the Lovings, The Loving Story depicts not only their struggle for equal rights, but also their real-life love story. The documentary was produced with a grant from the National Endowment of Humanities and originally premiered on HBO on February 14, 2012. As we celebrate this year’s Valentine’s Day and Black History Month, The Loving Story serves as a timeless story of love and equality.

The documentary is also a part of Created Equal: America’s Civil Rights Struggle, a four-part video series and education resource that will be sent to 500 communities across the nation to commemorate the 150th anniversary of the Emancipation Proclamation.

The Loving Story is available online at HBO.com, and it also continues to appear on the channel’s programming.